The heart and soul of Masterpiece – Steve Lukens is the invaluable Operations Manager for the company. Steve is the consummate professional who has worked in the carpentry field for over 25 years. The last 20 he has honed his expertise in staircase and millwork building. He has been a valued member of Masterpiece Staircase and Millwork for more than fourteen  years.

Steve believes in the traditional European method of staircase building. He trained under a master builder who was a tough guy that demanded perfection. When you watch Steve work you can see that perfectionist trait in him as well.

After studying old European styling, Steve developed a sense of design that strives to create a staircase that is not only strong but also looks as if it is intended for the space it inhabits.

When not at work he does custom turning of newel posts and balusters, owns a respectable collection of guitars that he is constantly plucking, or if he needs to get away Steve has a single engine pilots license. 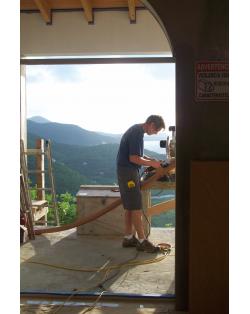