Jon Wisher began his stair building career with Ferguson Stairs in 2006. He thrived in the workshop and loved creating beautiful and functional staircases. Unfortunately, in 2008, Ferguson Staircases decided to close their shop. However, Jon knew exactly what he wanted to do professionally so he started applying to stair companies in the area. He was excited to be taken on by Masterpiece Staircase but sadly they had to downsize a few months later due to an ownership transition. The new Masterpiece owner Steve Lukens rehired Jon in 2010 and taught him everything he knows about creating intricate staircases and running a shop.

Jon realized that this was exactly where he wanted to be for the rest of his career. Masterpiece was his destiny, and he was determined to take over when Steve decided that he was done. At the end of 2022, Steve was ready to retire and helped Jon to transition into business ownership. Jon already had a great team in place, and everyone was excited about this shift. When he manages to escape from work, Jon enjoys spending time with his family, hiking, camping, and making things in his workshop. 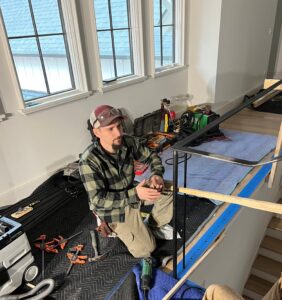